I had to get up once during the night and the mist had cleared revealing the impressive stars again. I was cold when I got back in my sleeping bag but once I had cinched everything tight and added an extra hat and jacket I got back to sleep.

Today was a late start so I was up at 0800. Breakfast was Porridge, Sausages, Omelet, Pancakes and fruit plate. We left at 0850 with just Zachary and I while the others finished packing. The route was well defined but rocky path through volcanic terrain. The Gorges Valley was below to the right and at one point we could look at where it dropped off steeply with a waterfall coming down the steep face. The vegetation was sparce and still alpine and I could see how big the mountain plateau is. We continued dropping and entered some scrub which was hip heigh. 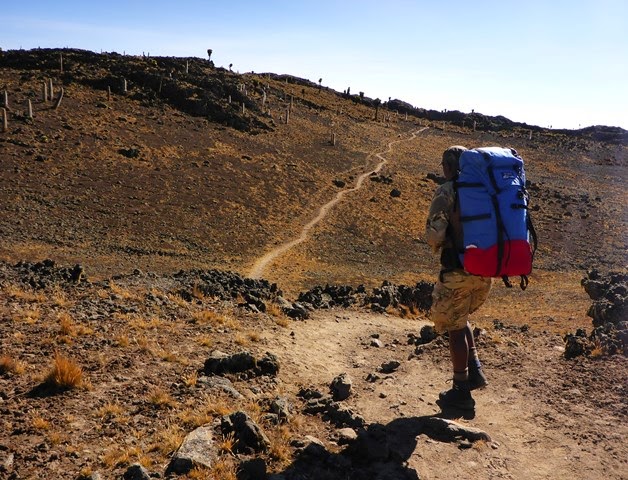 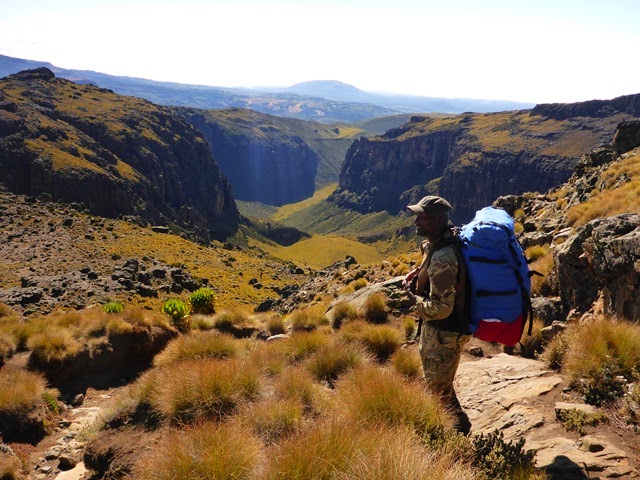 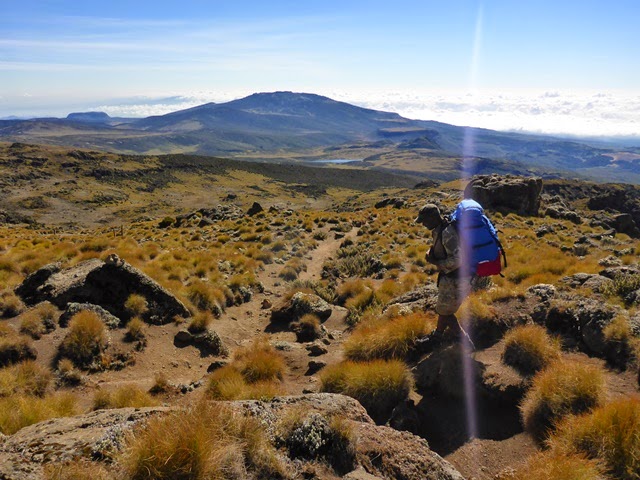 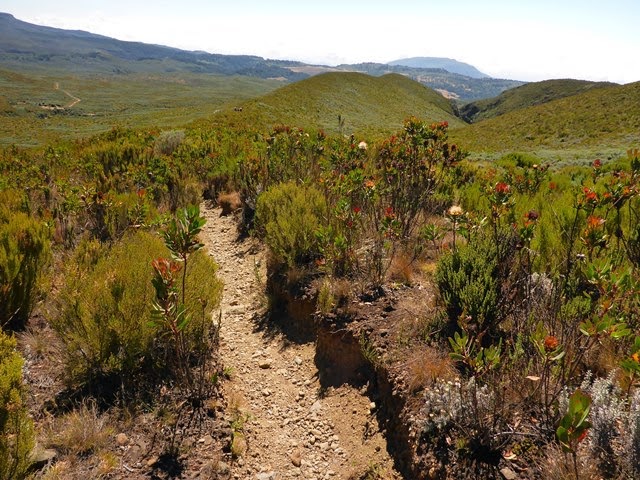 There was a couple being guided up by Jerimiah who had escorted me from Nairobi. They had a guide and 4 other people. David and Basta caught up shortly after and we continued to the camp that was an option for me yesterday. It was pretty uninspiring tucked in the scrub and limited views so I was glad I opted to stay by the tarn yesterday.

Now we were on a dirt road for another 7 km to the Mt Kenya Lodge. At the Lodge we had one chalet to ourselves. There was a lounge area with a fire, a kitchen and a room with 3 beds and a bathroom. The guys lit the fire for the water heater and I had lunch while waiting. Lunch was baked beans which had been jazzed up to taste really good with onions, courgette and some other things. This was served with noodles.


Once the water was heated I had a shower and washed my clothes, putting them outside to dry but keeping an eye on them as Zachary had mentioned monkeys around. The guys disappeared to their accommodation elsewhere in the camp and I relaxed reading.

At 1500 David served afternoon tea of popcorn and digestive biscuits with hot chocolate.

At 1800 was dinner of Buttercup Soup, a vegetable stew with chipati bread and a fruit platter. The camp caretaker lit the fire and lamp. As Zachary was explaining the plan for tomorrow it started to rain quite heavy and I was glad I was not in my tent anymore. The guys left and I spent the evening curled up in the comfy chair reading.

I went to bed and discovered that the bed was really narrow and I had to be careful not to fall out. There were sheets and blankets but it was cold so I stayed fully dressed and had a hat on and my hot water bottle.

I was up at 0630 and this time packed all of my stuff into my own pack. After another huge breakfast we left at 0730 and walked 20 minutes down the road to where the LandCruiser was waiting. The weather had completely cleared and it was warm and sunny. On the way there were Hyena tracks quite fresh on the road. 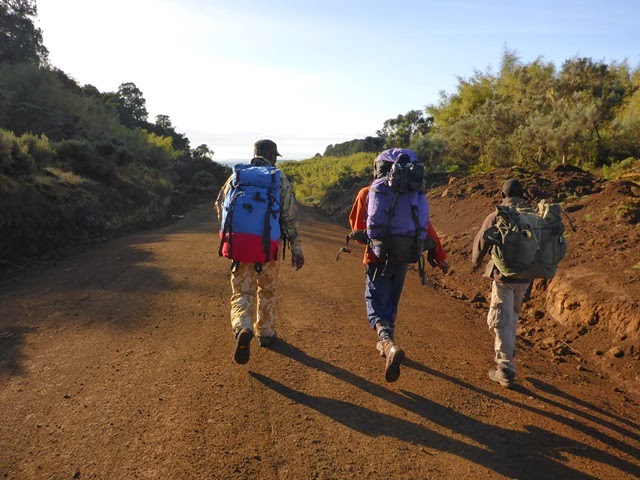 We were in the Landcruiser for nearly an hour driving down a dirt road which was in much better condition than I was expecting. For much of the descent the vehicle engine was off and we just coasted down.

Once in the town of Chogoria I said goodbye to the crew and Alex drove me back to Nairobi taking 3 ½ hours. 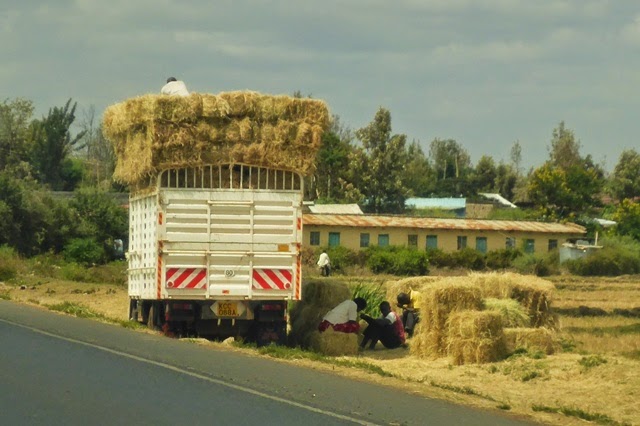 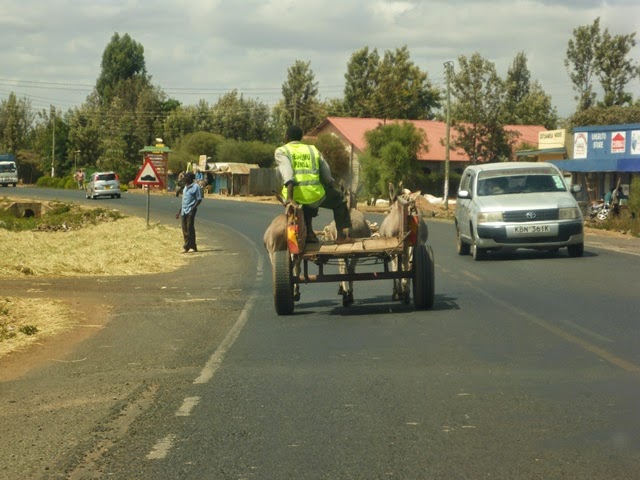 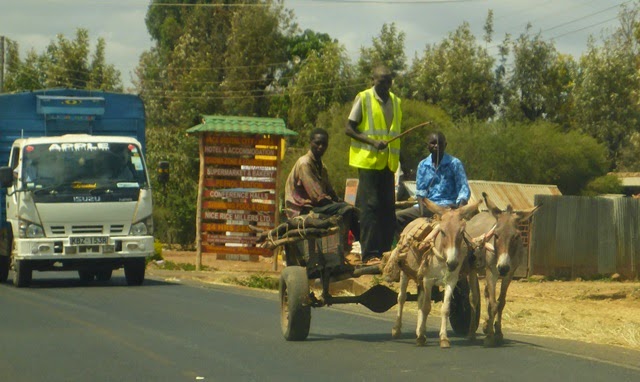 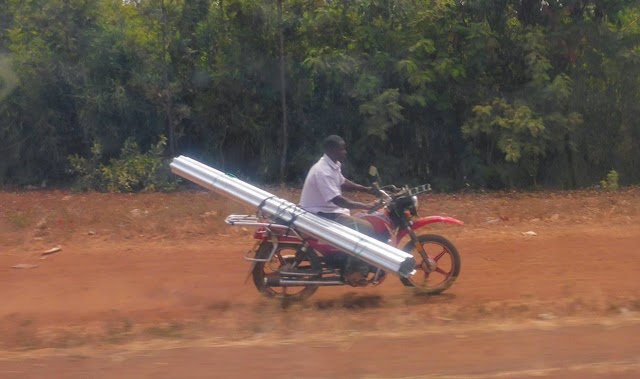 I had lunch then relaxed for the rest of the day.
Posted by Restless Kiwi: Walking the Te Araroa Trail at 07:59 1 comment:

The american group started getting up at 0200 and were not quiet about it. One of them kindly shook my foot to wake me and I managed to politely say I wasn’t getting up for a while. The first group left at 0230 and the rest at 0300.

I got up at 0320, packed and had a snack of Digestive Biscuits and a coffee. I filled my water bottles with hot water. One went into an insulated pouch I had made out of a closed cell foam mat and the other on my shoulder strap. The temperature was meant to be -5 degrees but it felt warmer so I just wore my normal trousers with gaiters,  my normal merino blue top, a 260 weight merino top, light windproof hat, fleece gloves and waterproof outer gloves.

David and Basta would leave at 0600 and take the shortcut to the breakfast location so it was just Zachary and me leaving at 0400. Walking out of the hut I had to pause to take in the immense blanket of stars that covered the whole sky. It was pitch black apart from these stars and the lights of the head torches of the american parties above on the hill.

Zachary kept a slow pace knowing how far we had to climb in the thinning air. I felt strong and was not puffing or feeling any effects of the altitude.  The path was steep and slippery with loose gravel. I was able to clearly see the advantage of my walking poles as I watched Zachary constantly slipping.  Not only do the poles save energy by the upper body taking some of the load off my legs but they let me walk more upright keeping traction on my full foot. Zachary was leaning forwards which meant his traction was only on the balls on his feet hence him slipping more.

As the pace was easy I was able to look around, mainly at the stars but also at the torch lights ahead and as we gained height I could see the lights of the towns below. The only sound was the crunch of the frosty dirt (like walking on snow) and the loose gravel. After an hour the tinkle of ice in my water bottle joined in.

I felt warm except for my left thumb and middle finger until we reached the saddle and a cold wind appeared which caused more of my fingers to get cold. The bonus now was a beautiful cresent moon to add to the impressive sky scenery.

Zachary dropped his pack here and we sped up a little.  5 minutes later we passed the first group and rapidly caught the second group 10 minutes later meaning we would now be the first to summit.  Near the top I stopped to put on my ZPacks Rain jacket and pants to block the wind and my big down jacket for some extra warmth as I would be sitting around. Now the track got really steep and it was a scramble up rocks for another 10 minutes. Just below was a small Glacier which I was surprised to see. Near the top some wire topes appeared. Their placement was strange and they were more a hindrence than help as I had to step over them. At some metal rungs bolted to the rocks I left my poles and climbed up this ladder to the summit.  It took 2 hours.

It was a fantastic feeling to have made it. The sky was just starting to change colour and I had the top to myself for 10 minutes. I watched the sky light up in orange and red reflecting off the fluffy clouds below.  In the distance I could see Mt Kilimanjaro where I was heading next. As the sun came up Zachary took summit photos of me and I recorded the sun coming up. The last of the americans arrived at 0700 having missed the sunrise but still happy to have made it.  Zachary was great never showing any impatience to be leaving and seemed to be enjoying the views as much as I was. 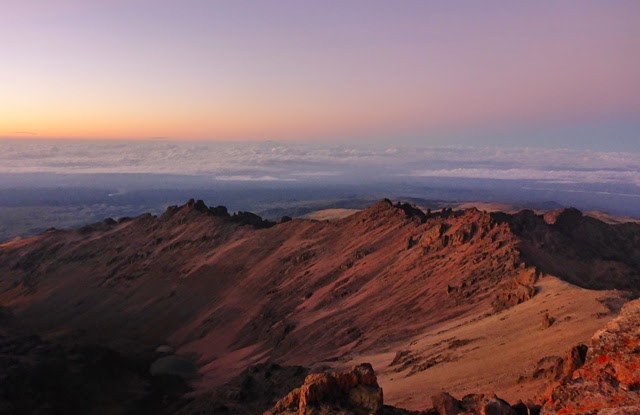 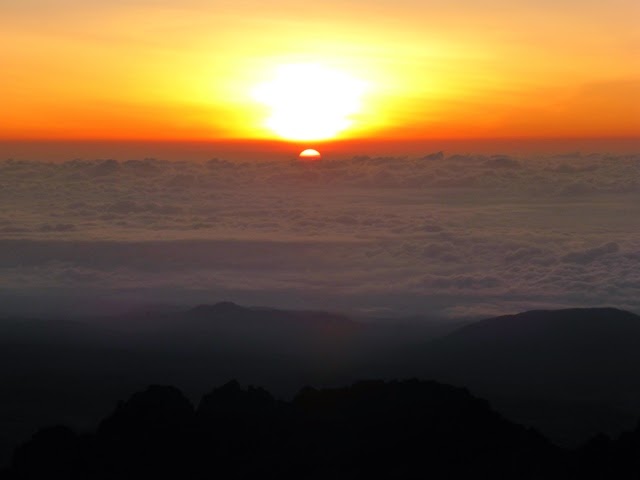 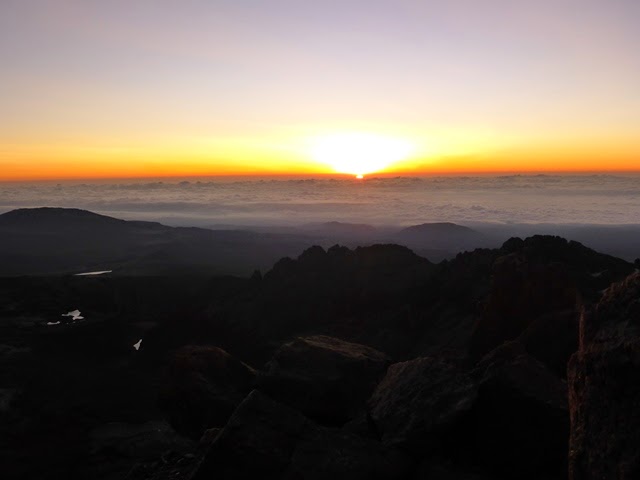 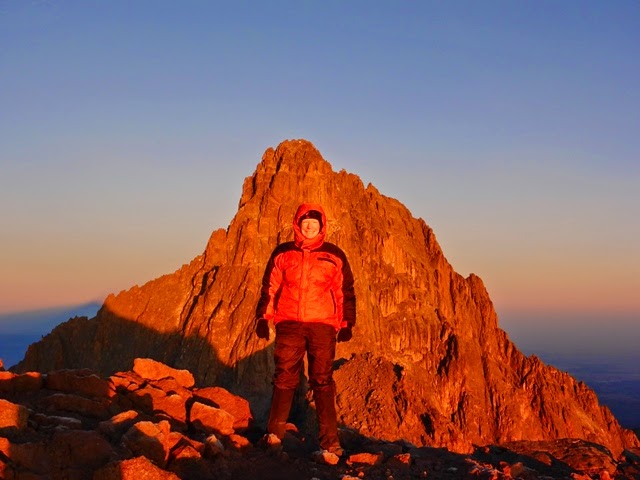 We left at 0715. I stopped to photograph the glacier and the route down. We could see our breakfast destination well down the mountain and made good time back to the saddle where I stripped off back to just merino tops as with the sun up it was rapidly warming up though my water did not melt for another two hours. 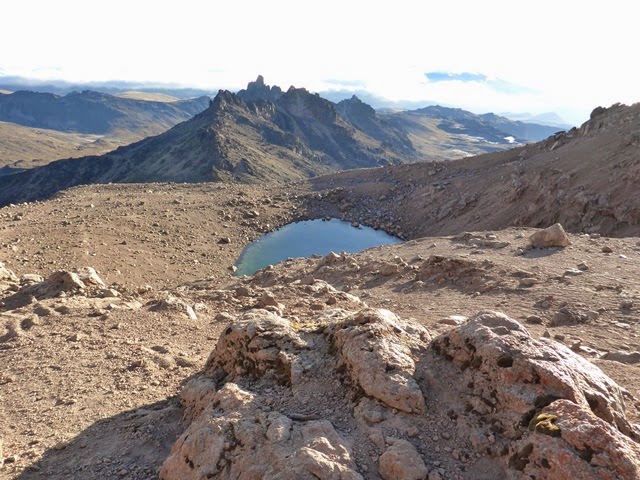 We headed down the opposite way we had come up, now on the Chogoria
Route, and dropped rapidly to a valley which led to a tarn.  Zachary gave me a choice to camp at the tarn (4200 meters) or keep going another 2 hours to another campsite at 3200 meters. As the tarn was so beautiful and I wanted to keep the altutude acclimatisation in preparation for Mt Kilimanjaro I opted to stay at the tarn. 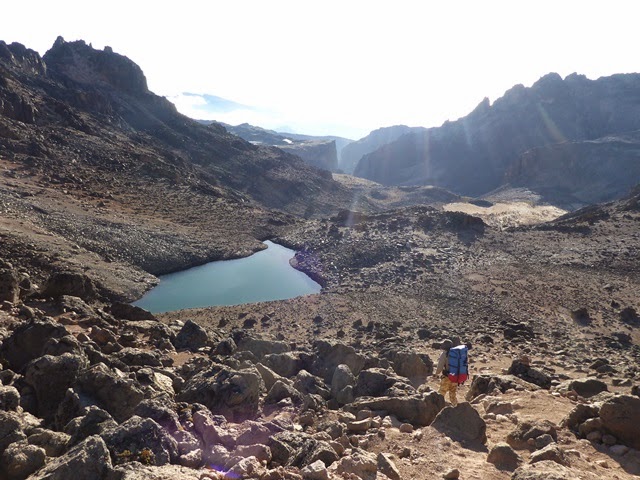 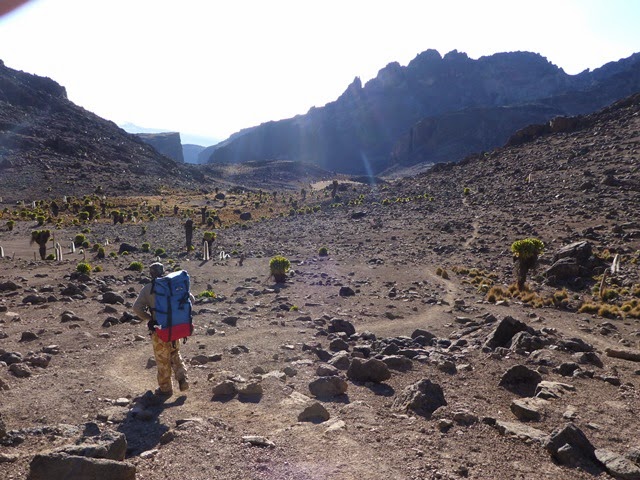 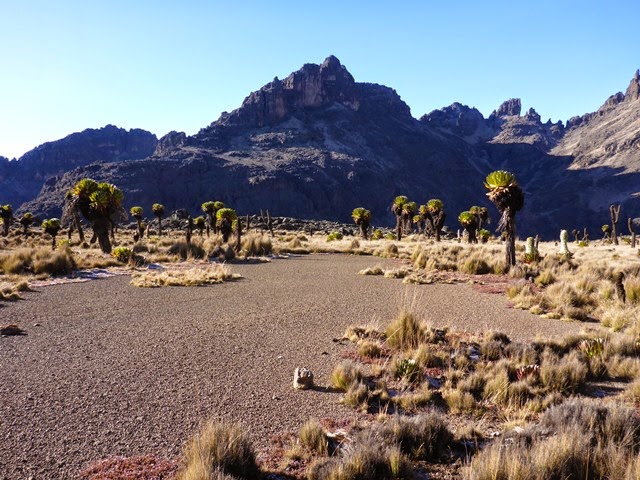 We walked around the corner where there was a hut and toilet. There David served breakfast of cornflakes, fruit plate (tamarillo, passion fruit, banana, orange and pineapple) omlette, sausages and toast. I then walkedback to the tarn where Zachary and Basta were putting up my tent. The time was then spent admiring the view and reading. 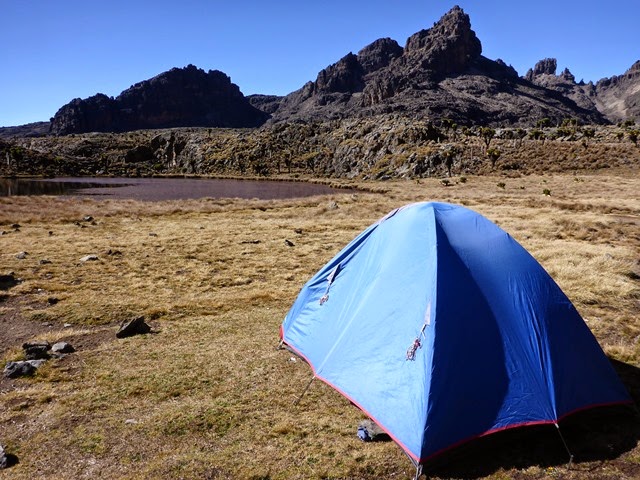 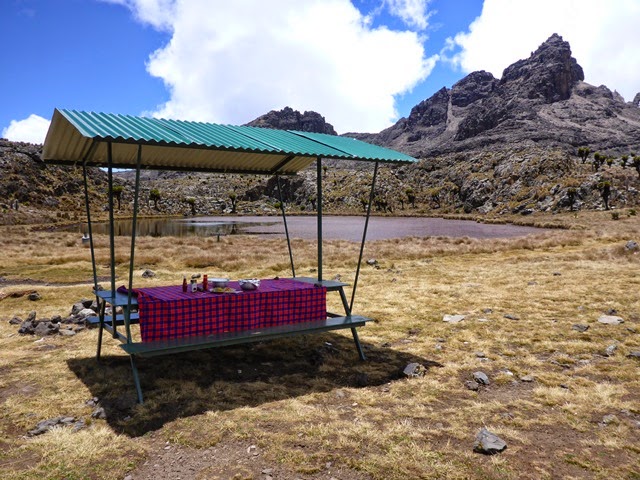 At 1200 David gave me lunch which was chicken and chips with coleslaw and a Ribina drink. I then settled back for an hour when Zachary took me for a walk to see some more tarns, Gorges Valley and Lake Michaelson. 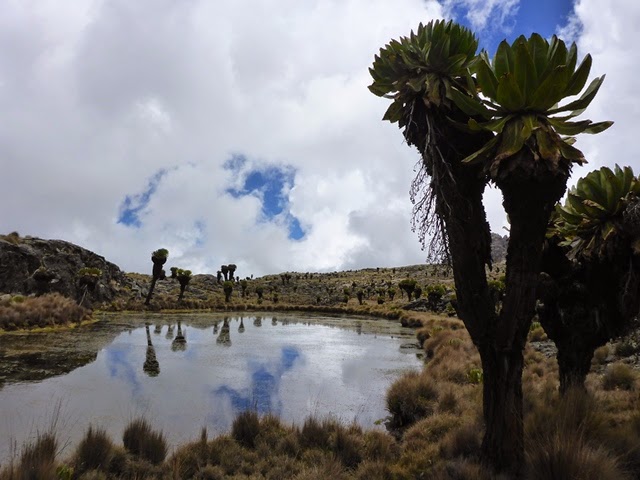 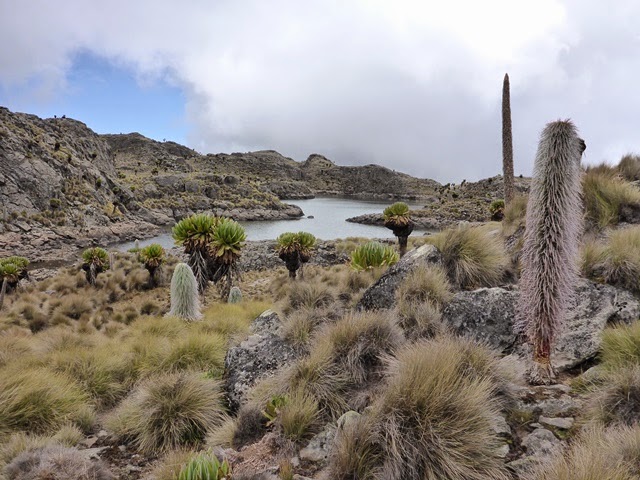 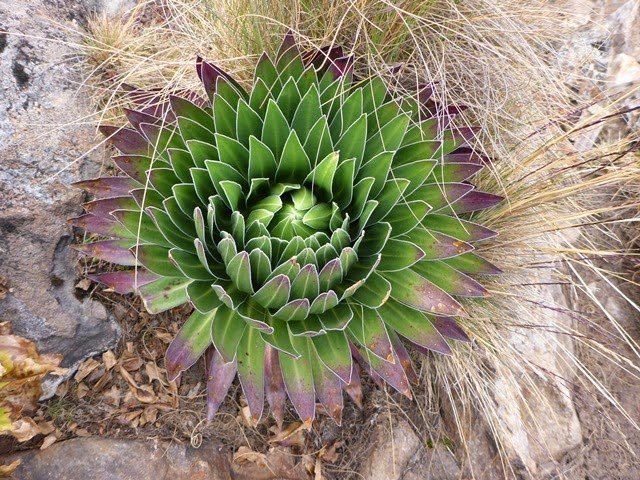 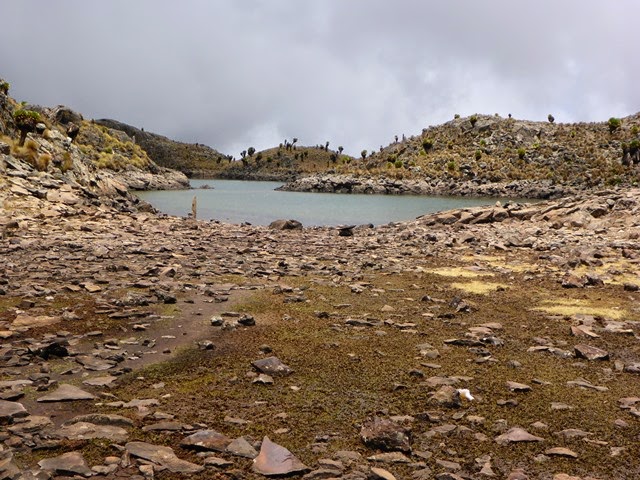 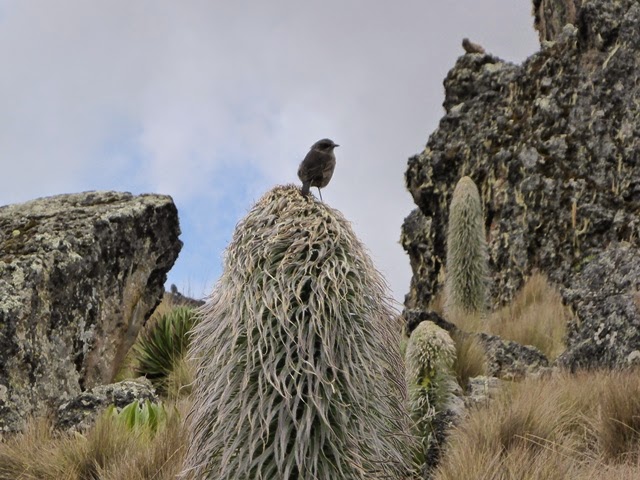 The rest of the afternoon was alternating between reading and watching the scenery. The mist was starting to come and go and was quite thick at times blocking the view of everything. The temperature also started to drop with the sun covered. A family came up the hill but they decided to stay in the little hut so I remained uninterrupted by the tarn.
Dinner was a butternut soup, pasta shells and a vegetable dish with the fruit plate and hot chocolate to finish. I then walked to one of the rock outcrops to see if the sky would turn red at sunset. The highest peaks were silhouetted against the sky and the clouds faintly turned orange but not as much as I was expecting. It was good to watch the mist coming up the Gorges Valley and creeping up the valleys to the high peaks. The rest of the evening was snuggled into my sleeping bag reading. I went to sleep at 2030 and had my top and a hat on, a hot water bottle and my heavy down jacket over top of my sleeping bag. This kept the temperature bearable but was not warm.