I left slightly earlier than normal at 0715. In 30 minutes I was off the Kapamahanga Track after going through some bush and farmland. There were two birds making a huge racket. It sounded like someone was being hurt but they were flying freely.  They were white and a good size but no idea what the were.  If I had to guess I would say Cockatoo.

From the track it was a short 2.5 km road walk. The mountain was covered in cloud and it looked like it was raining up there. 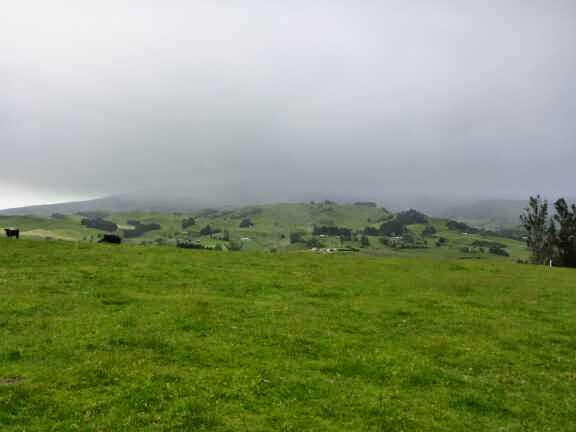 Mt Pirongia is under the clouds

The Tahuanui Track up Mt Pirongia started as an old vehicle track but with the wheel marks done as two nice paths in gravel. This track followed the river until the campground. Then it turned into a standard tramping track and I really liked it.  Enough roots to be interesting but not enough to stop me really looking around while walking.  It was a steady climb and moved through a few different vegetation zones.  This tramping bliss ended as I reached the main mountain ridgeline.  Here the bogs started in dark thick mud. The ridgeline also went up and down quite a bit. And it started raining. 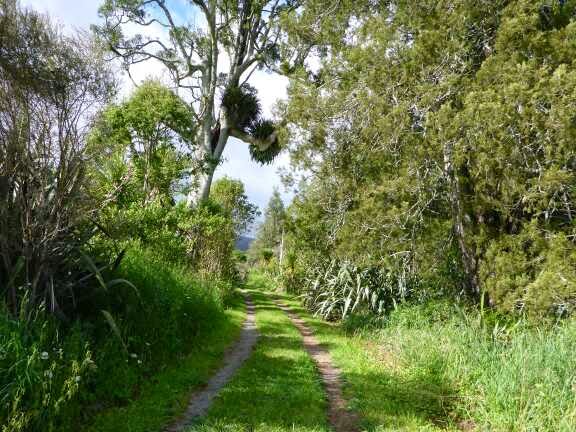 The Start of the trail 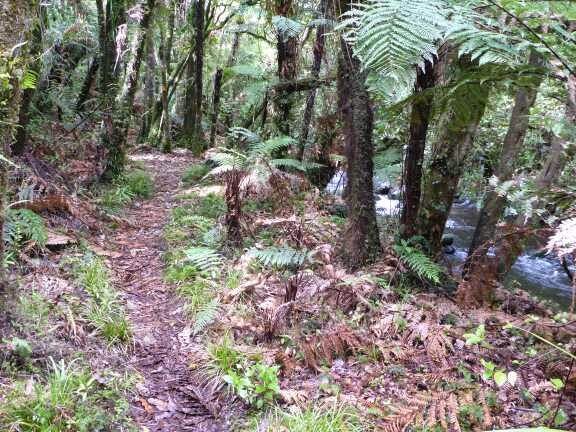 All nice trail by the river 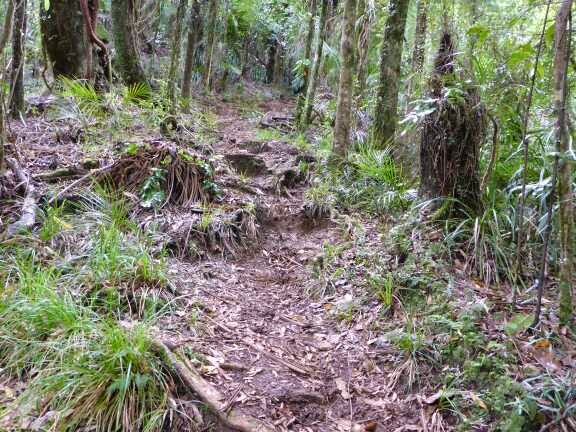 As the trail starts heading up it starts to get rougher 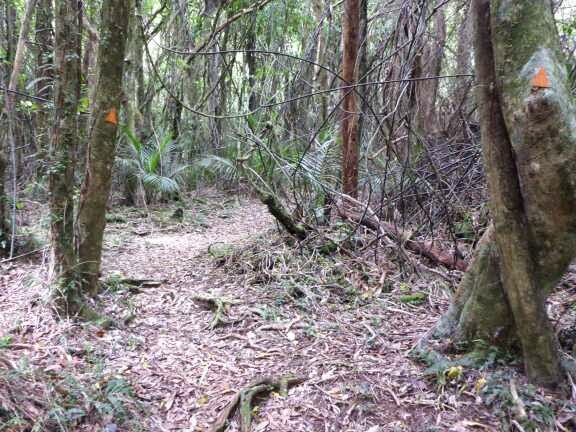 Luckily the Supple Jack Vine is back from the path 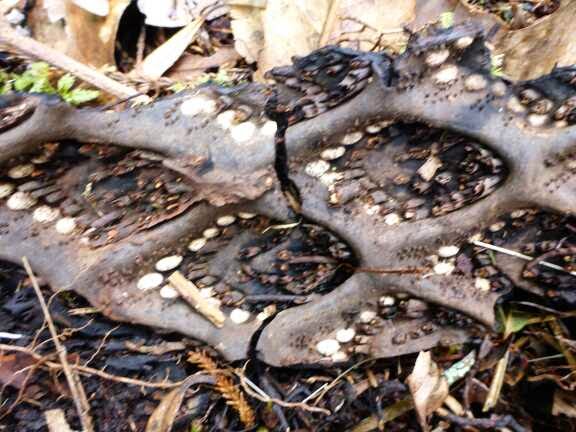 Guess what this is (answer at the end) 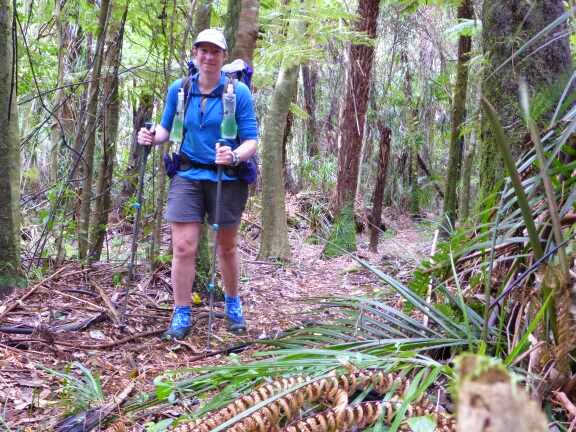 Happy on the nice trail

Once the first junction was reached the standard of the track improved a little and there were even some boardwalks.  Just as I was approaching the summit the rain started coming down harder and the clouds closed in so I couldn't see anything from the summit lookout.  The wind was really strong and driving the rain nearly horizontal. Luckily it was only 20 minutes to the Hut. 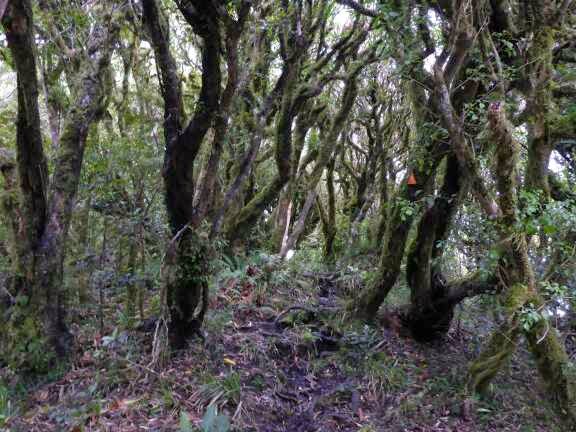 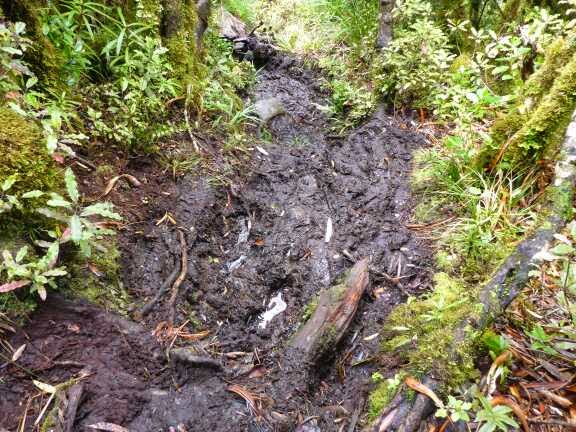 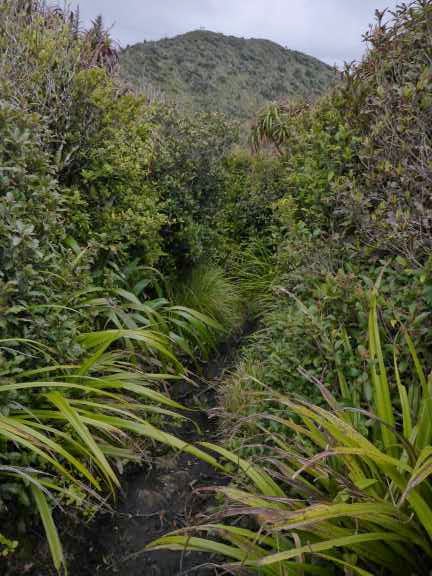 Looking at the summit. You can just make out the lookout 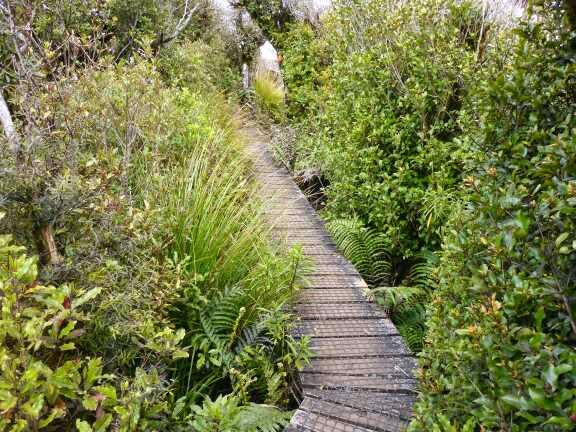 There were a few bits of boardwalk 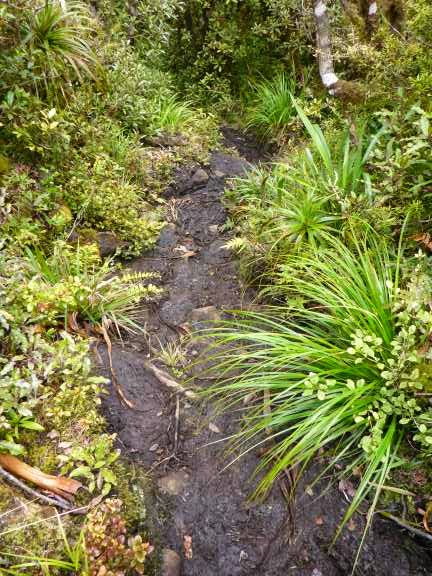 But more bits of mud 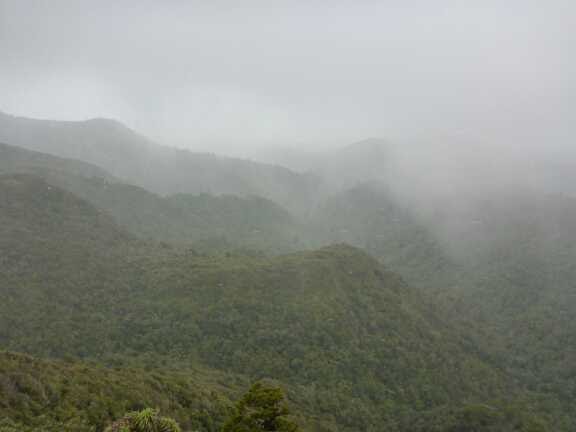 Sheets of rain blowing across 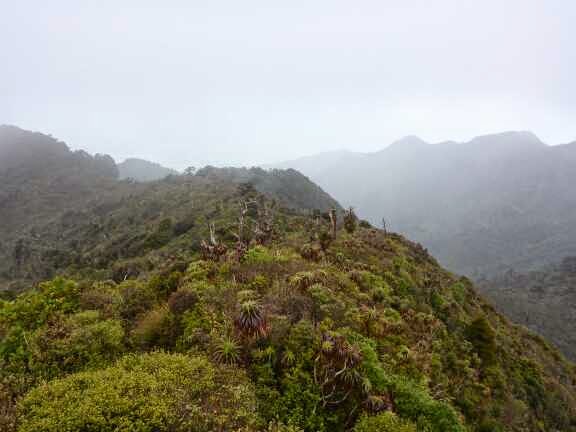 The view, or lack of, from the summit 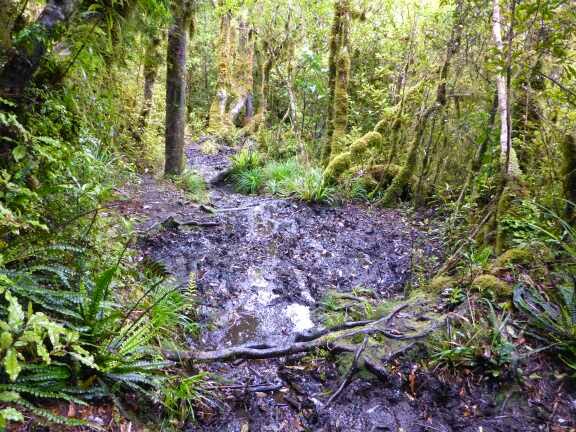 A little more mud on the way to the Hut 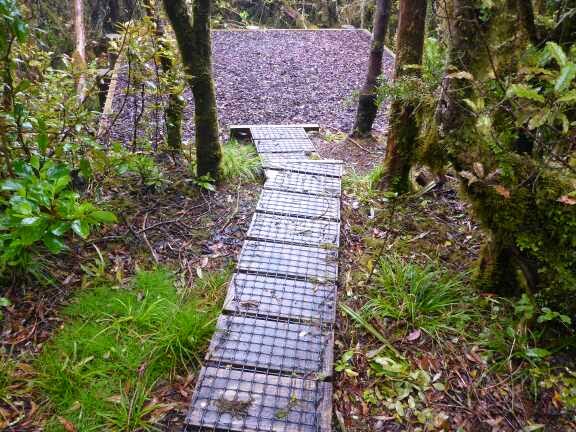 Flash campsites at the Hut

The new hut is finished and is just waiting Council structural consent but closed until then.  I went into the old but which is cute.  Strange that the mattresses have been removed except one. I decided to take an extended lunch to see if the weather would clear. Once I finished I still waited.  Every time I decided to leave it woud start training even harder.  It was hard getting the motivation to go back out into the rain when I was in a warm toasty hut but 1400 was a little early to stop for the day.  Eventually another person turned up and that was my motivation to move on.  Thankfully the rain had stopped though the wind was still strong.

I now took the Hihikiwi Trail which for me is awarded the WORST TRAIL award for all of the Te Araroa Trail so far - Yes even worse than the Raetea bogs.

The trail started beautifully with raised boardwalk for the first 700 metres. I was surprised that the were no handrails given the height of the boardwalk.  I had no issue with this except in one part which was exposed the wind nearly blew me off. 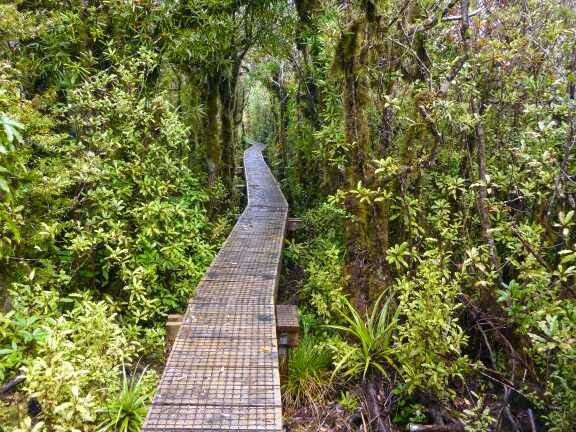 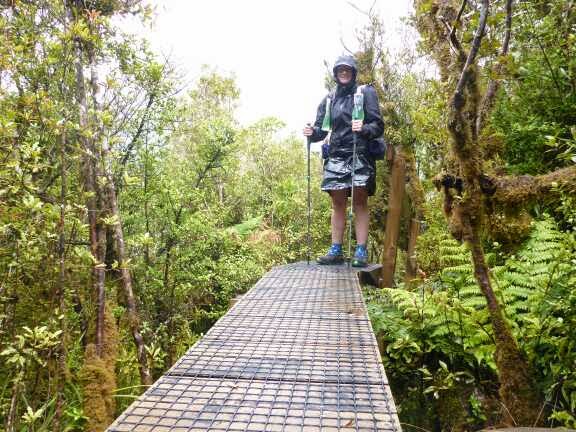 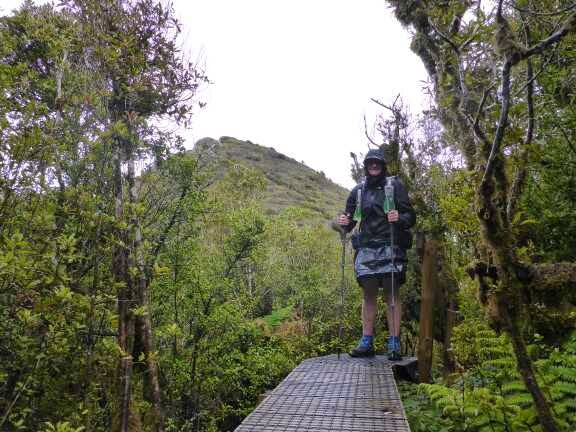 Take two - there is the mountain behind me now 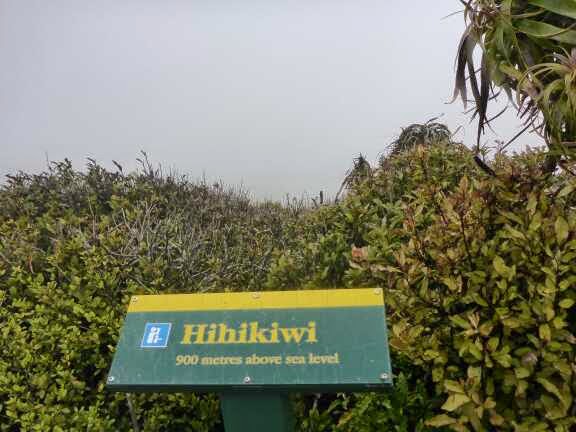 Once off the boardwalks the first 50 metres was great and I thought " neat no bog,  this will be a quick walk down." Ha how wrong was I.  It turned into 5 km of continual bog and steep rooty ups and downs and I was really worried about hurting myself.  For those who did the Raetea Bog imagine this.  Take the Raetea bog and change the mud to dark brown almost Black.  Now add lots of slippery roots to the mud.  Now add steep ups and downs - continually. For real effect add rain.  Finally make this 5 km long.

I was mentality very tired and just wanted the track to end. The trail notes and DOC information boards had said there were steps for the descent and I imagined this meant once we started going down off the ridge.  I kept on looking for the stairs thinking they must start soon. I had a mental refrain on loop "where are the stairs,  where are the stairs".  There were the occasional random 5 metre stretch of boardwalk.  I think these were someones idea of a practical joke as they were so random and few and far between.  Also they were often impossible to get to,  or get off,  due to the massive bog they were in.  My walking poles were disappearing past the first adjuster regularly.  There was one extended section of boardwalk which got me excited but sadly it was back to bogs. I nearly pulled out my magic motivation improver, Wonka Rasberry Twister. In the end I made a deal with myself that I would have it at the end of the trail.  By the time the trail ended I was so happy to be done I forgot about my treat so it is still intact.

Less than 3 minutes from the end the stairs started. I wish they hadn't even mentioned them as there were so few and right at the end. 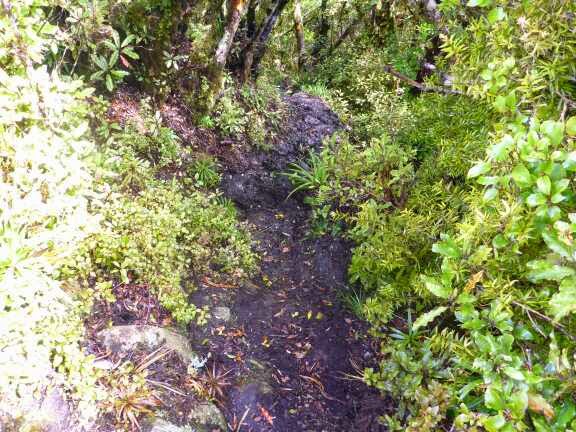 The true nature of the Hihikiwi Horror Track is revealed 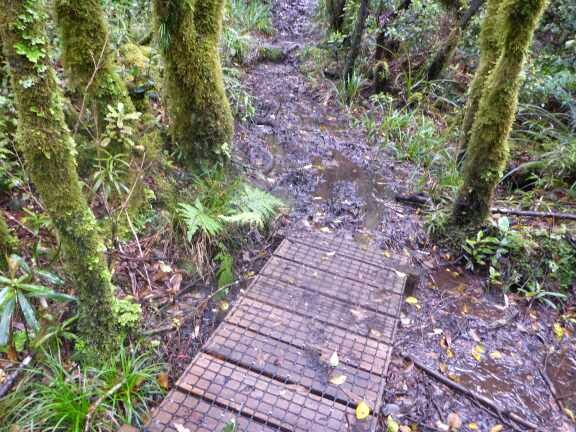 The boardwalks as a practical joke as there was a mud lake either before,  after our both ends of it. I didn't find this very funny. 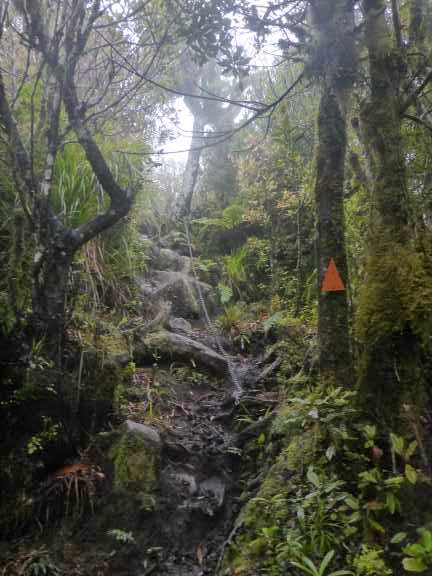 Dark,  gloomy, wet, muddy and steep - this sums up the track 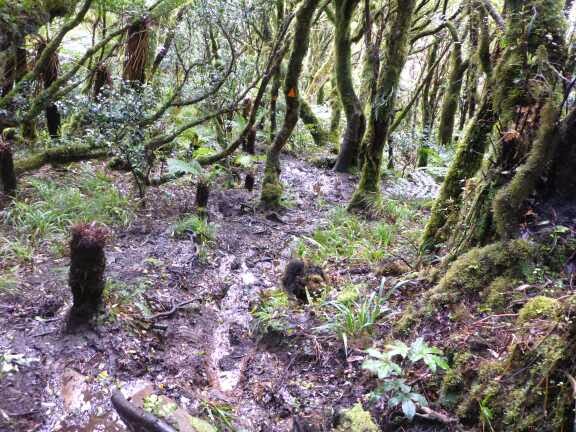 Photo doesn't show how steep this really was

Once on the road I just wanted to get as far away from the Hihikiwi Horror as possible so I walked a few km before looking for a nice campsite.  Once I found a nice campsite I settled in.  I hope I don't have nightmares about that horrible track tonight. 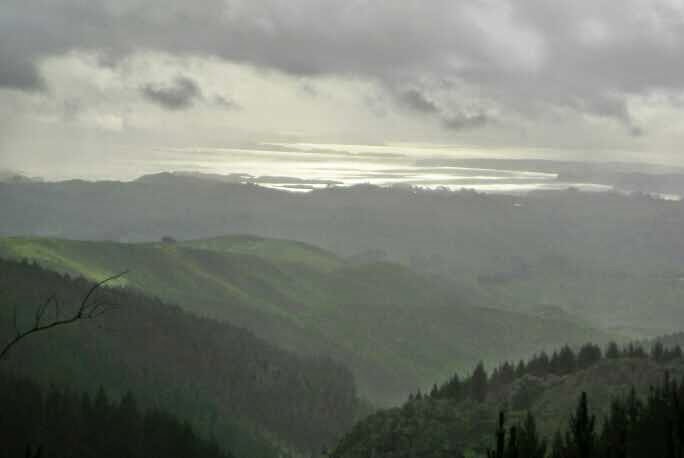 Free of the track and the sun is trying to come out. Looking over Kawhia Harbour 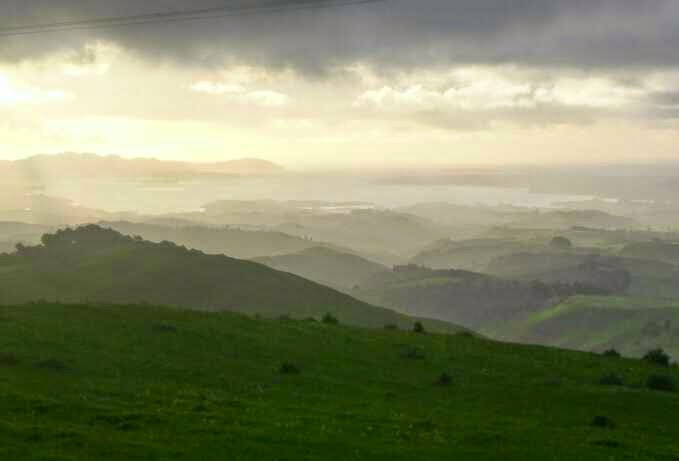 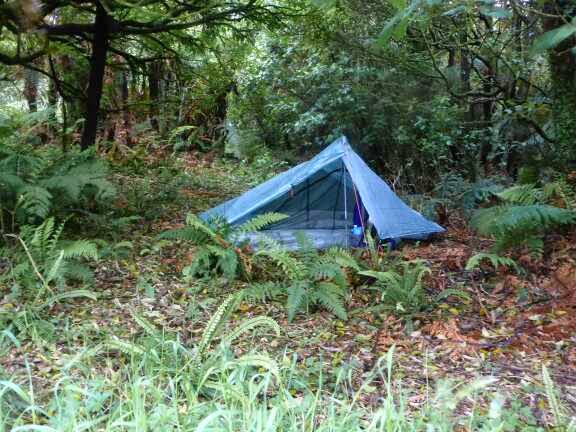 Posted by Restless Kiwi: Walking the Te Araroa Trail at 20:28