We were woken by one of the guides telling us off for not waking ourselves. It seems everyone was pretty tired. We were meant to be leaving at 0730 but by the time we got up, waited for breakfast (funny despite being told off for not being up the breakfast was not ready) and packed up it was 0930 and we had a long day ahead of us. I had my appetite back and had a big breakfast trying to make up for missing dinner and emptying my stomach yesterday, involuntarily.

Today we were going to walk in one day what had taken us two days to get up. This meant a day of 7-9 hours after our epic 17 hour day yesterday. We started together down the hill and across the bog. It started raining not long after starting out. I felt tired but not too bad. When we hit the hill Anne Marie struggled again so we took it easy which in some ways was good for my body but I was concerned that I had a limited amount of energy and going slowly would mean I was on my feet for a longer period and would run out of energy before we reached the destination.

At one point when we were waiting we saw a Rwenzori Turako which was beautiful colours. There were many beautiful sights to distract from my tiredness like the lakes, water droplets on the vegetation and the hills around us. We made okay time to the base of the main challenge of the day, 400 vertical meters up to Bamwanjara Pass.

Like usual we only had Ochura with Enrok staying behind. I told Ochura that we needed to separate as Anne Marie would be at least an hour slower than us climbing up and we were at risk of not making our destination if we stayed together. I felt mean saying this but the South Africans were in agreement and if we did not make our destination tonight it would be an incredibly tough day the next day to try and reach the Hostel. There was very little room for delay as my flight was early the day after. I was still concerned about how long I could stay on my feet today and wanted to go faster. As Enrok had not caught up to us I suggested that he stay with Anne Marie until someone else caught up and the rest of us continued up together. When Enrok caught up Ochura could catch up to us and we continue together. Ochura was not sure about this and we basically said tough, we were doing this when to Ochura’s relief a porter arrived who could walk with Anne Marie.

We then started the climb. I actually felt okay and was able to climb steadily without needing breaks. We were all climbing at our own speed and would wait periodically for everyone to catch up. Err was struggling and asked us to go ahead so we pushed on to the Pass. As we reached the pass we started to see patches of snow and then lots of snow which was very pretty. It was misty so there were not great views of the distant scenery but I was fascinated with the snow in the strange vegetation of Centosa Trees. 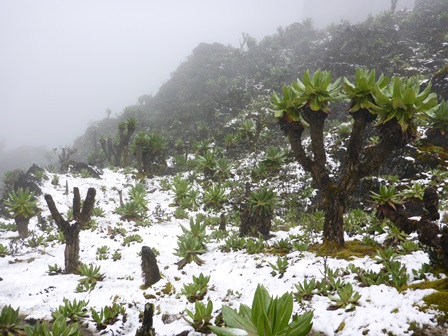 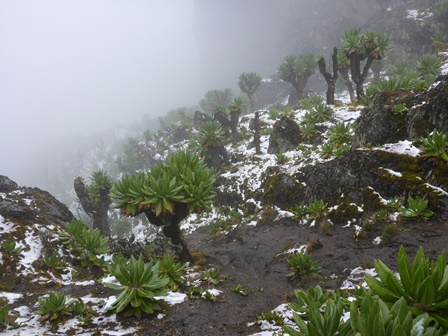 At the pass we waited and Matt brought out the Biltong (sort of like beef jerkey) that he had carried the whole way. It was delicious and a good way to fill in the time waiting for Err. Eventually we cooled down and took shelter behind a rock and then Err arrived, looking fresher than he claimed he felt. Now we knew it was largely downhill all the way. We made good time to Bugata Camp where we had lunch of sandwiches and juice.

After a short break we left. Just as we left a group was approaching the hut and I got a few comments about my umbrella. I had now run out of energy and strangely stopping and eating lunch had not revived me. I was now really tired and struggling. Err was behind us walking with a porter so there was just the 4 of us. When I realised how tired I was I asked Matt to carry my boots and he agreed which made a good difference.

There are no photos from this point forward as I was too tired. I just concentrated on following the person in front of me with sheer stubboness keeping me walking forwards. Every little uphill was a struggle but on the flats I was able to zone out and keep moving forwards. It was a relief to get onto the boardwalk section and know there wasn’t much further but I had forgotten how long the bog was in the valley. It seemed to go on and on much further than I thought possible. Though it was exhausting to climb I was almost happy (no energy to feel any full emotion) to reach the final hill as I knew I could stop soon. With many rests I pushed up the final climb up to the rock camp, Mutinda Camp.

When I arrived I sat at the table for at least 15 minutes not moving, just staring into space. I was at the limit of my endurance. Finally I had the energy to set out my sleeping bag and the hot water arrived and I tried to have a tea and immediately felt nauseous and once again the plants benefited from my lunch. I started to feel a little better and when the porters got the fire going I was happy to sit in the warmth. Err arrived nearly an hour after us and another 40 minutes later Anne Marie arrived. We were all really surprised as we thought she would stop at Bugata Camp. I was very impressed that she had made it.


I turned down dinner as the thought of food made me nauseous and went to bed at 2000. Thankfully I slept solidly all night.
Posted by Restless Kiwi: Walking the Te Araroa Trail at 07:05