Today we were in high spirits as it was the last day. We had a sleep in and left at 0930. Matt left us early to run with the Porters down the hill and we expected him to arrive and the Hostel several hours ahead of us as the porters were going really fast. Anne Marie also stayed with a porter and slowly dropped behind.

We descended down the ladders to the streambed, across boardwalks and bogs, through the twisted trees, down more ladders, through more bog, across the stream and alongside a hill with the final few climbs of the day. 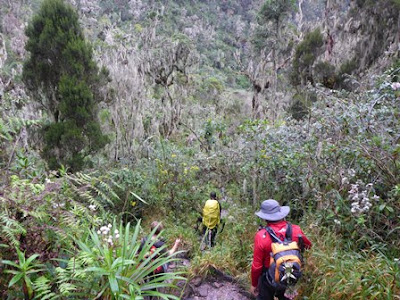 We reached Kalalama Camp and had a short break. Here I changed back into my boots and gave my gumboots to Ochura, thankful not to ever see them again. Now we were on largely dry tracks heading down hill and we were able to go really fast. I was feeling good and able to keep up with our fast pace with no issues. 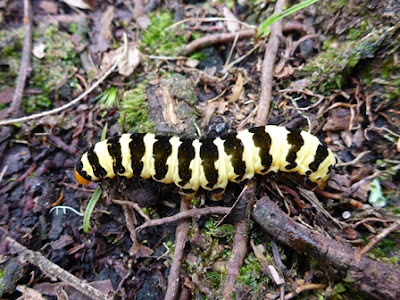 We stopped in Sine Hut for lunch and continued down the steep hill to the bridge. From here the path was not as steep and we stayed winding our way through the jungle alongside rivers. We passed one group heading up the hill without slowing down to chat. 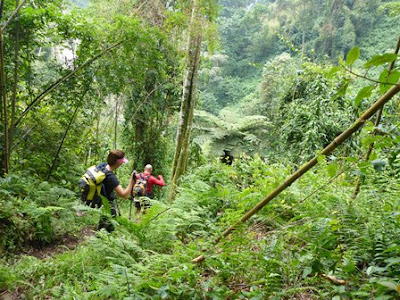 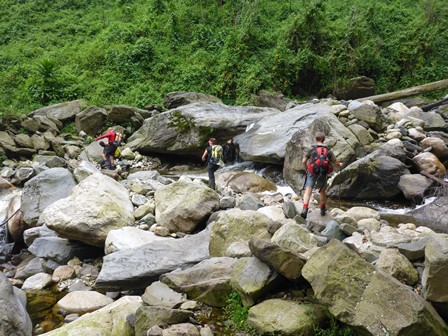 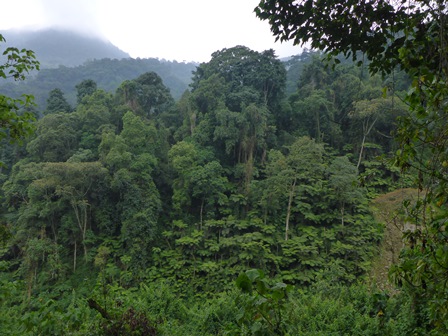 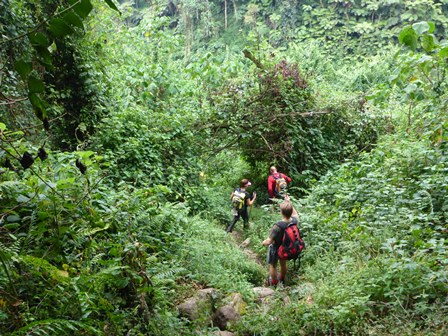 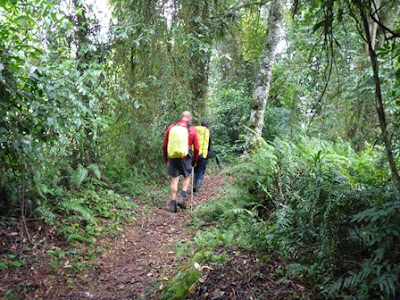 Finally we reached the Park Headquarters to quickly check out. Good intent but this is Africa where nothing is as easy as it should be. I was first through and the lady said I owed her one more days Park Fees. I said that no we were 7 nights as per the book. She then claimed that it was counted by 24 hour and as we entered in the morning and left in the afternoon it was an extra day. My reply was see the Guide Company as I was all inclusive and they were responsible for my park fees. Next was the South Africans and she insisted that they had to pay the extra day. They pointed out that I did not so why should they. Then she said she would be nice and not make them pay another day but the lady who took their money did the exchange rate wrong and they had to pay more money. They pointed out they had no money and could not pay. This went on for some time. I asked Ochura to sort it out but he wasn’t very helpful. At one stage we got to a chicken and egg with her saying give the money to the trekking company and them saying they need a receipt for the money and her saying no money no receipt. Eventually they were allowed to leave with a promise they would pay at the hostel if someone turned up with the receipt book. I am not sure what happened with this in the end.

It was a shame to finish the trek with this sort of nonsense, whether it was an attempt to earn some money on the side for her or just bureaucratic ineptitude. However it didn’t take long for us to forget this. We now left the jungle and climbed onto a ridge before descending down to the village to make our way to the trekkers hostel.  We were all on a bit of a high realising we had achieved what we wanted, though it was harder and more beautiful than any of us had expected.

The others disappeared to their rooms and after a pause for Rwendori Trekking Services to write my certificate I was whisked away to my hotel. The others were all staying at the hostel but as part of my all inclusive experience, and due to my early flight, I was staying at a hotel closer to town. While it would have been nice to have a few drinks with everyone I had no regrets about being in the hotel. It was Hotel Margheria which was 4 star. I had a large clean room. Unfortunately the water was only luke warm but I made the most of the hard spray to clean off 8 days of sweat and grime. The day after the summit I had though I had scratched my nose as there was often fluid or flaky bits on in. When I looked in the mirror I realised that I had been so badly sunburnt on the glacier that my nose and chin were blisted. Obviously the sunscreen I had picked up in the Entebbe supermarket did not work, or I needed to apply it more frequently. I did a quick wash of my filthy wet weather pants and boots before putting on sandals and heading to the restaurant for a coke, plate of hot chips with vinegar and coffee. It was wonderful. Then I relaxed in my room, enjoying being able to sit in a comfortable chair. Then dinner and desert and I crashed, sprawled across my king size bed.

The next morning I had a large breakfast and left at 0700 for the Kasese Airport. After waiting in a terminal that looked like a VIP lounge with comfortable leather armchairs and couches, but smelt of a urinal, my plane arrived. It was a 1 hour flight to Entebbe where I had to wait a couple of hours before checking in to the United Nations flight to Goma.

The next day and a half I had to take sick leave as I was exhausted and it has taken a couple of weeks to get my energy back.

Overall this trek and climb far exceeded my expectations in every way. It was absolutely stunning with a huge variety of landscapes and vegetation. It seemed like around every corner was a surprise of yet another beautiful scene. I had known from reading articles and blogs that it would be muddy and tough but I was not prepared for just how muddy and how physically demanding it would be. I do not remember the last time I have been so physically exhausted that I was vomiting. I was also surprised by how technical the climbing on the glaciers were. It is definitely achievable by people confident on heights but would be terrifying for many people.

I would defiantly recommend this trek/climb as it was outstanding, with the proviso to make sure you have good fitness beforehand and are used to walking 6-7 hour days.

The company I used was Rwenzori Trekking Services (http://www.rwenzoritrekking.com)
Posted by Restless Kiwi: Walking the Te Araroa Trail at 07:12