Just to confirm the distance for today is 50 km, this is not a typo.  I had this challenge of 50 km in a day (which I determined as 12 hours) on my radar for a few weeks.  I thought about trying for it after Te Kuiti but I was too slow through the river section.  I thought it could be attempted during the long road walk between Wanganui and Palmerston North but last night as I reviewed the maps I clicked that the distance for the two days was 53.5. All but the first 13 km was on roads and that first part is Fishers Track which is a mountain bike track so it couldn't be to bad.  I decided to make a decision at the end of the track and when I made good time I decided to go for it,  body willing.

So now going back to the start,  actually back to last night. After I updated my blog with yesterday's adventures I got a message from Joey that he was at the backpackers. We met up in the TV lounge and I met Joey and Geoff from USA and, Julein and Romain from France. These last two were the frenchmen I had seen at Ahapara Holiday Park. These four have been together since the bush of Northland.

It was an entertaining evening taking about what we have been up to,  gear,  future plans and LOTR as Joey and Geoff are big fans.  Hopefully of the plan works out they will now be joining me for the canoe down the Wanganui River which will be great. After such a long time not seeing any other TA walkers it is nice being around some.

Now back to this morning.  I had a lazy start and once I had packed up I got into my rain gear and headed to the 4 Square/service station to get a healthy breakfast of chocolate milk and a steak and cheese pie. I then went back to the Backpacker to checkout and just after 0800 was on the road.

There was a short 1 km road walk through National Park Village to the start of Fishers Track. This track was a lovey gravel road through bush for the first 6.5 km. During this part there was a light rain and dense mist so I missed out on what I assume are nice views. There were heaps of footprints of deer on this track.


The gravel road then became a grass vehicle track for a couple of km then a narrower track for the last few km.  I was below the mist now and the countryside was beautiful and rugged.  Down below the track was a river winding through the valley and heaps of waterfalls. In this section there were heaps of wild goats which is not a good thing from a conservation perspective. 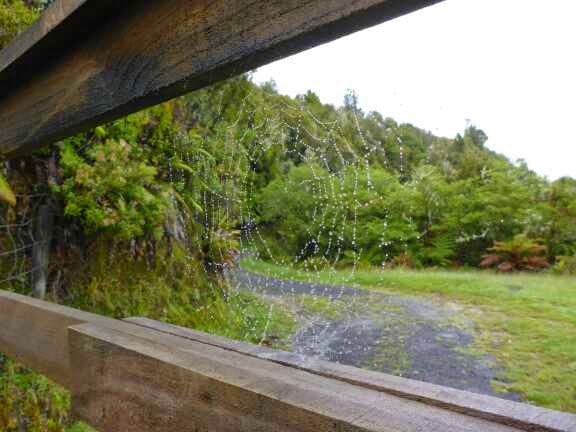 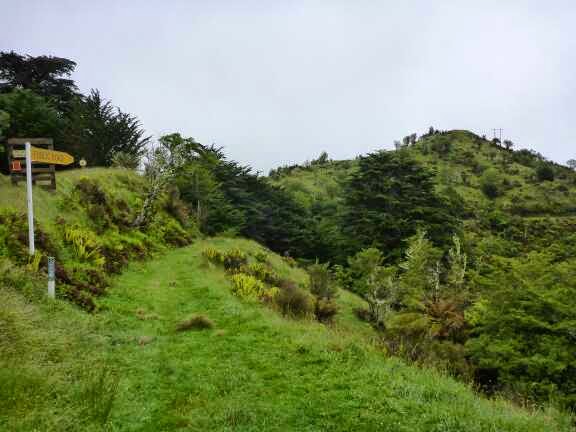 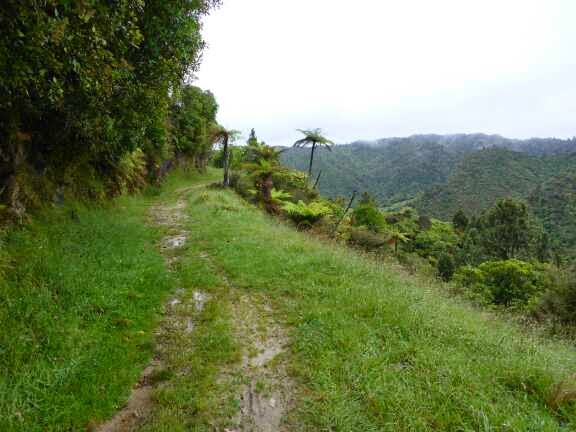 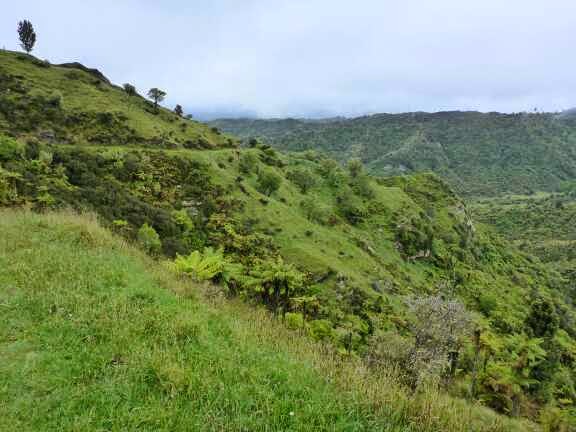 Track in the distance 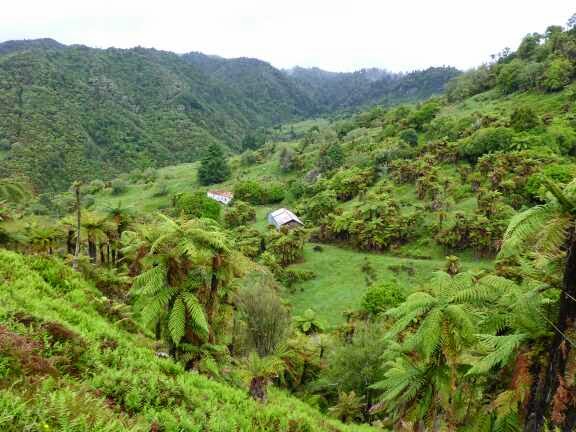 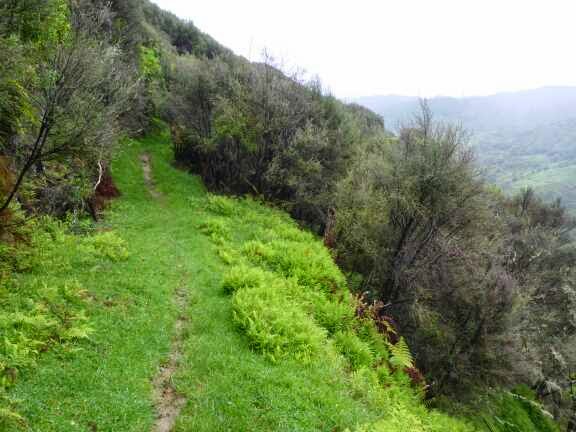 The track then joined a proper gravel road and finally the rain had stopped and I was able to take off my rain gear.

After 3.5 km I turned right into another road and followed that for 12.5 km. Along the way I stopped for lunch and a Grader went by which made the road easier to walk on for the rest of the road. 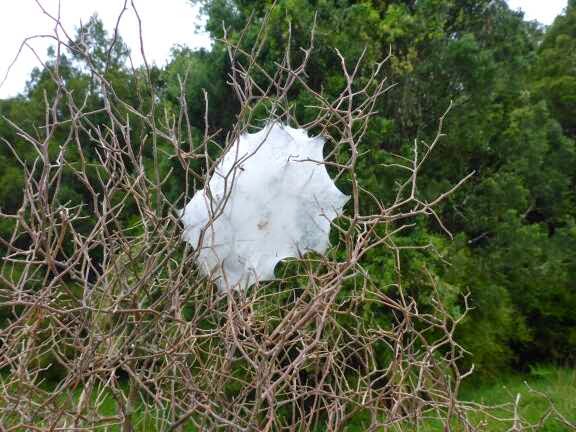 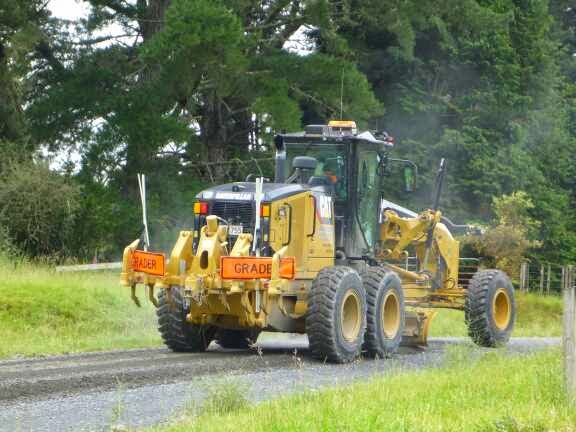 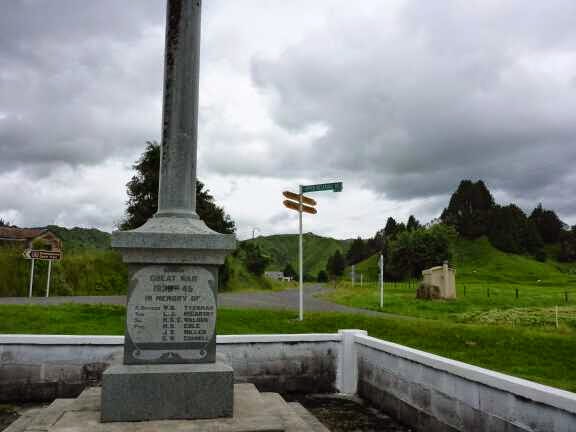 About 2 km from the end it turned into a sealed road and my body started complaining about this. For the first time my left knee was a little sore and my left shin (lower outside) as well.  The knee pain went away after a break but I battled the shin pain the rest of the way.  It would worsen if I tried to stride out so I had to drop my speed and take short steps then it would die down - frustrating.

I was passed by a family on Mountain Bikes just before the
Junction.  I caught up as the guy picking them up was explaining the history of the area and the war memorial there.  He knew about TA and explained to the family who were impressed.  They are doing Tongariro Crossing tomorrow and very excited. That was a nice break.

There were two signs at the junction. The road sign said 27 km to Whakahoro and the mountain bike trail sign said 24 so I will go with that one. The first 7 km was on tar seal and then thankfully it turned to gravel. 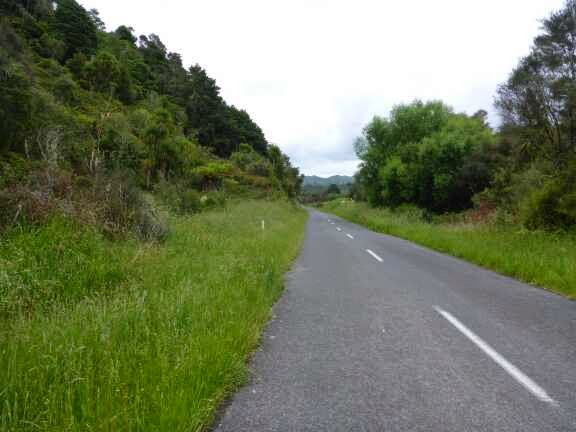 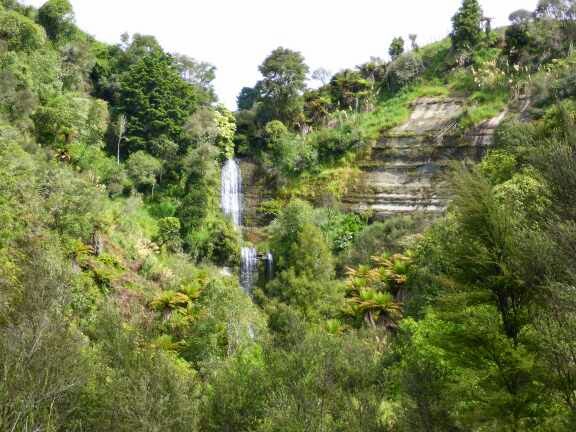 But some pretty sights 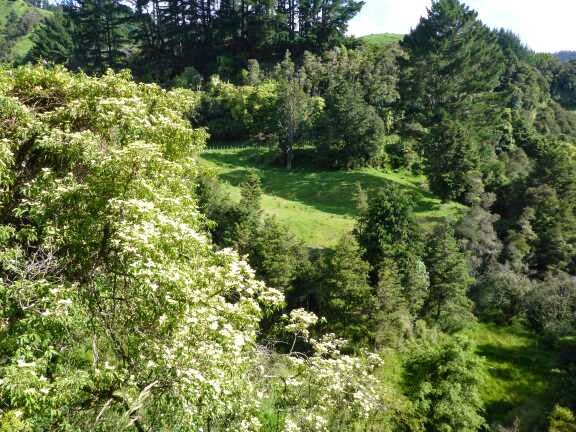 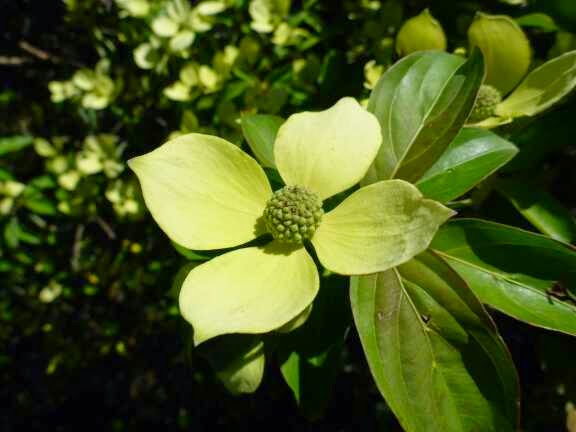 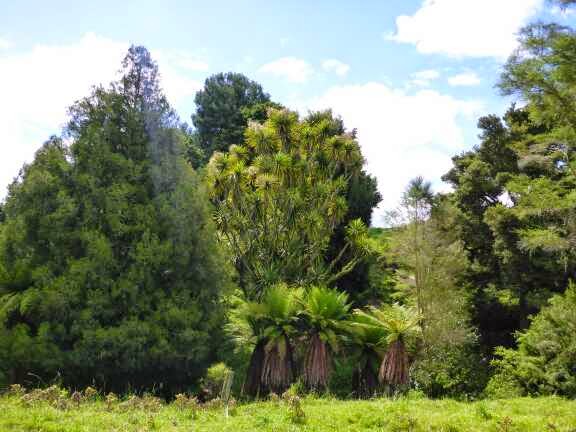 Biggest Cabbage Tree I have ever seen

At around the 38 km mark my left shin got worse and was really sore. I stretched and massaged and really dropped my pace to try and make it improve but after a few km there was no improvement and I thought I would have to stop.  I then loosened my laces and had a break and thankfully it improved and almost went away as long as I stayed slow so the challenge was still on.  I decided to continue but was now not sure if I would make my 50 km target within time - it would be close.

The road started following the river for the last 8 km and it was a very scenic walk.  I stopped to take a photo at the 1200 km mark and pushed on slowly.  It was frustrating that I could not go at a decent pace as I was feeling good apart from the shin. 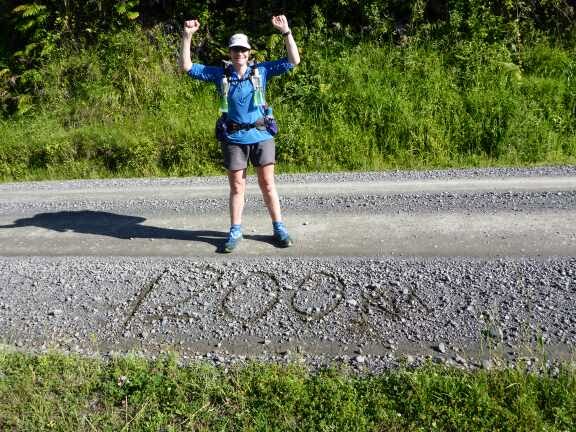 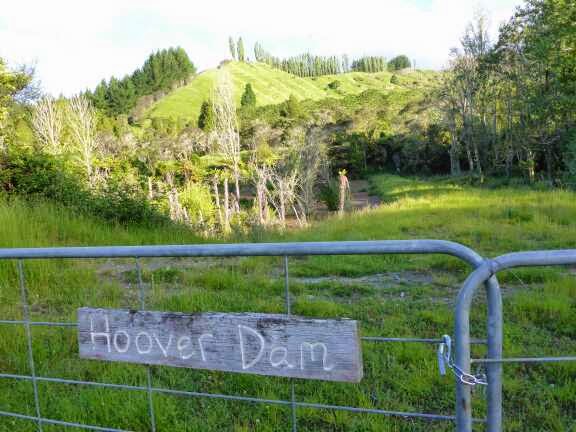 Hoover Dam - not the most impressive question 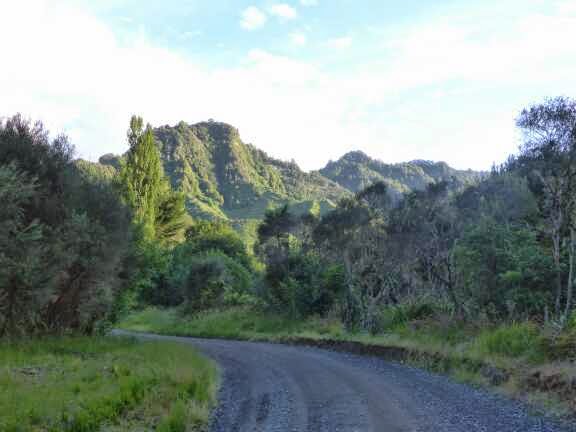 Finally a hill the TA trail doesn't go over 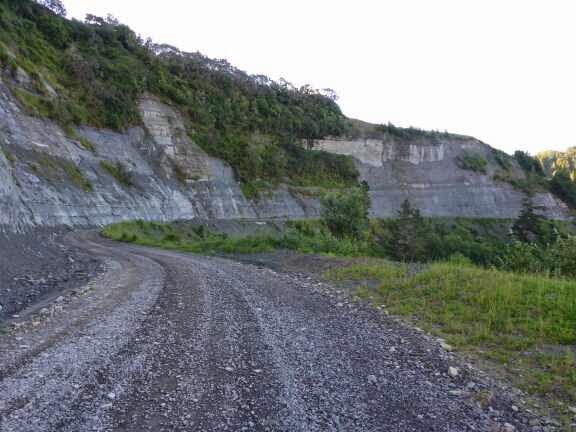 Impressive cliffs above the road 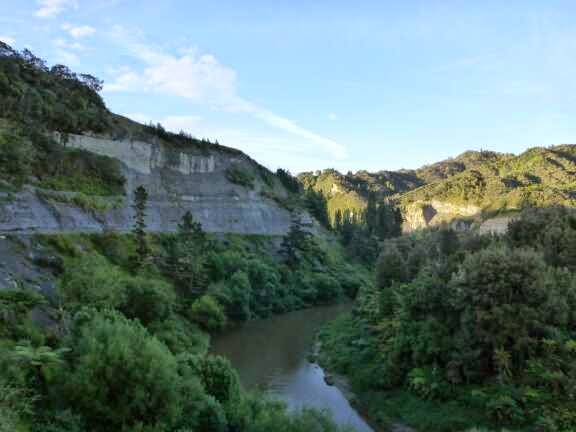 I made my target in 11 hours and 45 minutes and was pretty pleased.

I then started looking for a campsite and within 100 meters found a nice spot under some trees beside the road (on the road side of the fence so public land). 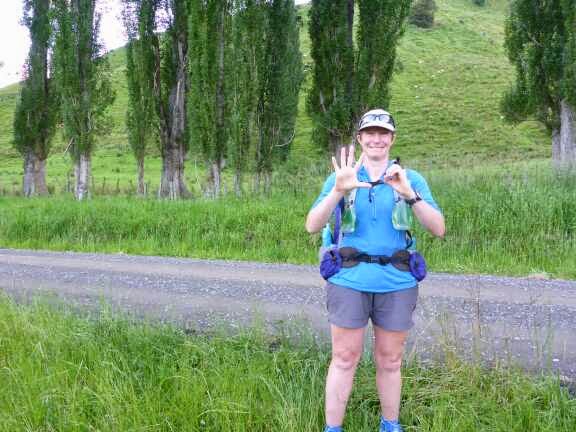 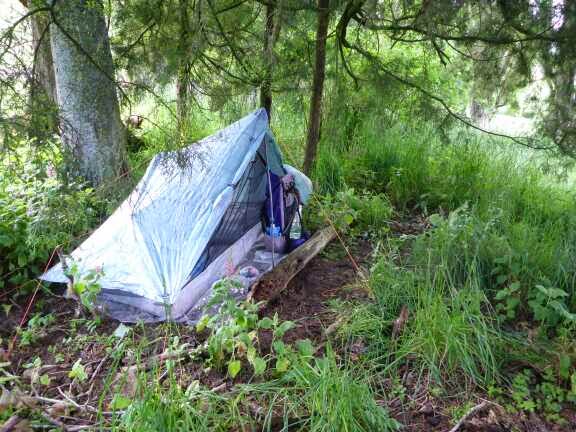 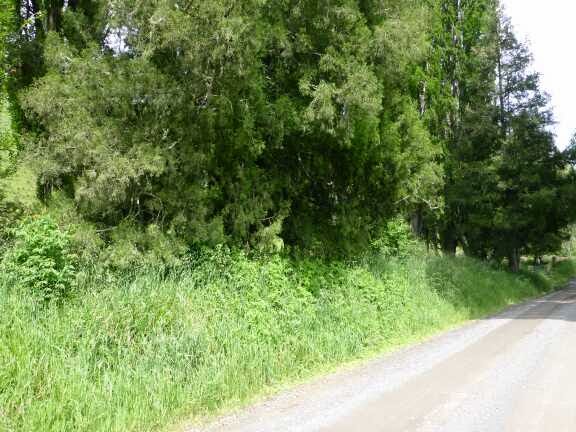 Campsite from the road

I was hungry so dinner went down quickly and I went to sleep fast to the annoying shreik of either a duck or Pukeko.

Posted by Restless Kiwi: Walking the Te Araroa Trail at 17:00